“Algorithm analysis can answer questions about running time of a standalone process, but it cannot answer questions about the performance of a system of processes competing for resources.” This is because things like storage access, i/o, and internet connections can cause delays that are difficult to predict. Queueing theory offers a way to describe (and predict) the time costs associated with such delays.

with 1/λ the average time between calls. He also found that the length of phone calls were distributed the same way:

Erlang employed Markov Chains (with the number of current calls as the state) to predict the probability of losing a call.

Capacity planning describes how to keep queues from getting too large, in order to prevent delays, and manage response time.

Buzen and Denning discovered that the assumption of flow balance (#arrivals = #completions) led to same equations as stochastic equilibrium.

Server independence: output rate of a server depends only on its local queue lengths, not on that of any other servers.

Conclusion: “traditional assumptions of queueing theory can be replaced by… flow balance and server independence and still yield the same formulas”.
Calculation and Prediction with Models

Denning gives the example of a wine cellar to demonstrate the principle of Little’s law.  If a restaurant owner would like their wine to be aged R = 10 years, and they sell X = 7,300 bottles per year, the owner should build a wine seller with a Q = R * X = 73,000 bottle capacity. 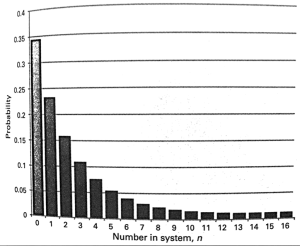 Probability of dropping a call is p(N+1) where N is the capacity. 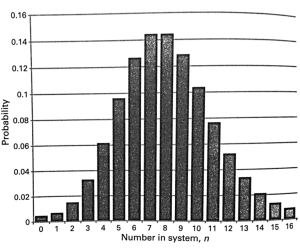 In 1973, Jeff Buzen discovered “Mean Value Analysis”, a way to calculate in O(#users * #servers) time the server response times, system response time, system throughput, and server queue lengths. The model is extended from the principles of the operation laws.